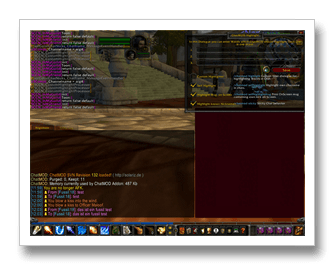 Ok first at all this post is written in english because I want to collect every Feedback not just from german users. After 7 month without an really neccesary update I have to change some things because of minor compatibility issues reported by some users. The work I done this noon was mainly fixing bugs reported since the last revision 131 in October '08. Also I Updated some parts of the language files and decided to switch the whole Addon to UTF-8 encoding because of the Chinese version.

But besides several bugfixes the custom highlighter function was improved, in the past there was this nasty behavior of the highlighter, highlighting textparts within words. For Example, you configured to highlight the word "Resi" now the highlighter did his job and highlighted everything with the substring resi. This leads to strange highlightings like Resistance. Since rev 132 there is a additional option in the Highlighter screen "full words only" I guess I do not have explain what it acualy does.

Actualy only two.The 1st is the "Dismout on Taxi" this function is now implemented in the GameClient itself so no need for the Mod to do this. 2nd one is the Itemlinker this module caused me trouble since I first implement it. There are some other grat mods out there just doing item linking. Currently the wow client does support so many kinds of links that it simple is to much to have this as a  goodie function in a chatmod.

Because I'm not playing wow actively at the moment I have no possibility to test the new release in a "real enviroment". Of course I did a basic "dry testing" of all functions but you know there are many things which could cause errors you can't really test sitting in Ironforge  ;)  btw. thanks to Hudiny who lent his account for rev 132 development. My request to everybody who download the rev 132 testing version: Please post any found error or strange behavior as comment below this post. I will give this testing round about a week and try to fix all commented bugs on the next weekend. After this fix I will put online a public non beta.
✉ MG//Sat., 18. Apr. 2009 12:39 CEST